PhD student Madeleine Moses-Payne will work on an upcoming public engagement project in collaboration with creative collective EMERGE(ncy) PARTY. It will be funded by the Wellcome Centre for Human Neuroimaging’s Public Engagement Innovation Fund and supported by a National Lottery Project Grant, using public funding by Arts Council England.

Becoming: Exploring Adolescence will engage with young people from communities typically underserved by science to ensure that the Centre’s research aims and hypotheses complement the needs of young people.

Adolescence is a unique period of cognitive, social, and biological development. Moses-Payne’s research in the Developmental Computational Psychiatry team investigates how young people develop the ability to self-reflect and construct their sense of self during adolescence.

“I think adolescence is a really interesting phase of self-concept development because it’s where you start to question who you are and how you fit into your social group, and the sort of person you want to be,” says Moses-Payne.

Moreover, previous work from within the Centre has demonstrated that adolescents are less certain about their self-concept – their own likes and dislikes. This “taste uncertainty” is associated with increased susceptibility to peer-influence, which may lead to risky behaviour.

This work is also crucial for our understanding of mental health conditions such as depression, which tends to first emerge during adolescence.

“Therefore, the way young people reflect upon themselves might be a particularly important avenue for research. Most people will construct a relatively positive view of themselves, while others may not. We are interested in why and for whom.” 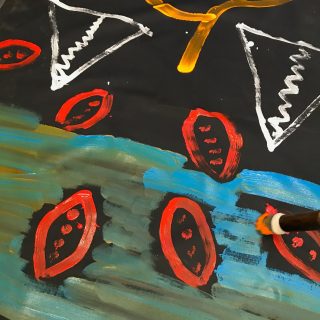 Becoming provides a unique opportunity to consult with young people about the construction of their self-concept and how they use their emerging autonomy to explore their environment and discover new aspects of themselves.

Working with schools and community groups, the project will recruit four groups of 10 young people to take part in a series of eight creative workshops. Moses-Payne and EMERGE(ncy) PARTY will target young people from communities who may typically be overlooked by scientific research, including unaccompanied minors, young carers, and people from ethnic minority backgrounds.

Each session will explore one of Moses-Payne’s core research questions, including: neuroplasticity, identity, the looking-glass self (how others influence our sense of self), agency and autonomy, risk-taking, peer influence, and group action. In the workshops, teenagers will produce creative works, such as writing, drawing, performance or soundscapes, based on collaborative discussions with Moses-Payne and artists from EMERGE(ncy) PARTY.

“One of the main things we want to make sure we achieve is that the adolescents feel safe and comfortable to share their thoughts on the research topics we will be presenting. Because we’re interested in self-concept and risk-taking and peer influence, it could potentially be difficult for young people to want to share, especially in a group setting.

“This is why we want to make sure the sessions are youth-led, where there’s no one who’s in charge of them or an authority. It’s just young people interacting with other young people.

“This is also a pretty unique environment in research, where we usually ask young people to take part on their own at a computer or in a brain scanner. It will be interesting to explore research topics with young people in a more naturalistic social setting, as we know peer relationships are particularly important during this time of life.”

At the end of the eight sessions, the group will decide how they wish to share their creations with their local community – perhaps by giving out poems with food parcels at a local food bank, or running an exhibition evening at a local café. The work will also be displayed online to reach a wider audience. 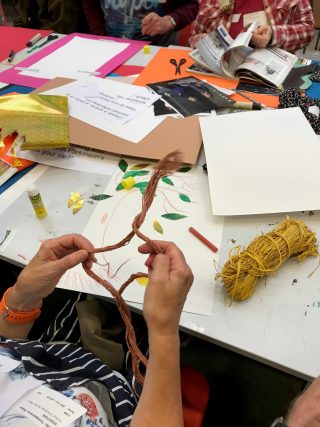 Then, through additional funding, the project team will select a smaller group of adolescents who they believe will particularly benefit from long-term engagement. This group will co-create a theatre production based around the theme of self-concept, to be premiered in late 2021 to early 2022.

To provide a glimpse into the inner workings of Becoming: Exploring Adolescence, the young participants will share their insights and creative endeavours from each workshop on an online blog.

Moses-Payne is most looking forward to seeing the work that these young people produce and allowing it to influence her research on teenagers’ mental health:

“I’m really excited to have a collection of work from young people that I can refer back to when I’m designing my next studies, and I’m looking forward to hearing their thoughts about my work. It will be really interesting and important to see what the young people think about the issues that we, as researchers, assume are important to them.”

You can find out more about Emerge(ncy) Party and the work they have been doing during the COVID-19 crisis at their website.