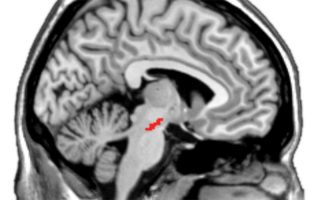 The findings, published in the Proceedings of the National Academy of Sciences (PNAS), could explain why humans are inconsistent and sometimes irrational.

“Experts have long struggled to explain why people are so erratic, making one decision one day and the opposite decision another day. We know that the brain is constantly active, even when we aren’t doing anything, so we wondered if this background activity affects our decision-making,” said the study’s co-lead author, Dr Tobias Hauser (UCL Queen Square Institute of Neurology).

“It appears that our inconsistent behaviour is partly explained by what our brain is doing when we are doing nothing.”

The researchers focused on people in a state of rest (awake but not doing anything). At rest, the human brain remains active, with strong fluctuations in activity that remain unexplained.

The researchers monitored brain activity in the dopaminergic midbrain, the area of the human brain containing most of the dopamine neurons. Dopamine is a neurotransmitter known to play a role in risky decision-making. Whenever the activity in that brain area was either very high or very low, the study participants were asked to make a decision between a risky and a safe option.

The researchers, based at the Max Planck UCL Centre for Computational Psychiatry & Ageing Research and the Wellcome Centre for Human Neuroimaging, UCL, found that when this brain area was in a state of low activity before participants were presented with their options, they were more likely to choose the risky option than when their brains were in a state of high activity (while still lying idle in the scanner).

Assessing the impact of these brain fluctuations, the researchers say the effect size is comparable to other known factors affecting risk-taking behaviour, such as drugs that influence the neurotransmitter dopamine that are routinely taken by people with Parkinson’s disease. The effect is also similar to ageing; being young is associated with greater risk-taking compared to being elderly.

“Our brains may have evolved to have spontaneous fluctuations in a key brain area for decision making because it makes us more unpredictable and better able to cope with a changing world,” explained senior author Dr Robb Rutledge (UCL Queen Square Institute of Neurology).

The researchers aim to continue their research to find out if variations in background brain activity may have other impacts, and whether they could be related to other medical conditions in case the findings could eventually inform treatment approaches, such as for pathological gambling.

“Our findings underscore the importance of taking time when making important decisions, as you might make a different decision if you just wait a few minutes,” said co-lead author PhD student Benjamin Chew (UCL Queen Square Institute of Neurology).