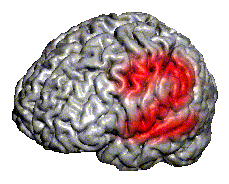 SPM2 is a major update to the SPM software, containing substantial theoretical, algorithmic, structural and interface enhancements over previous versions.

Previously, SPM has used unbiased ordinary least squares (OLS) estimators that, under assumptions of identically and independently distributed errors (i.i.d. or sphericity) are the same as maximum likelihood (ML) estimators.

SPM2 now uses restricted maximum likelihood REML estimates of variance components (pooled over voxels) to allow departures from i.i.d. assumptions. The ensuing non-sphericity estimates are then used to form ML estimates using weighted least squares (WLS). This increases the scope of data that can be analysed with SPM and provides more efficient and precise [hyper-]parameter estimates.

Classical inference about parameters, or contrasts of the model parameters, proceeds using conventional parametric statistics to provide P values pertaining to the maxima, spatial extent of voxel-clusters or number of clusters. These P values are used to reject the null hypothesis. The P values have to be adjusted to protect against family-wise false-positives over the search volume. This adjustment uses a Random Field Theory (RFT) correction that, for spatially extended continuous data, plays the same role as a Bonferroni correction does with discrete data.

These web pages provide further details of new features and structural and functional improvements in the software.

SPM2 is available for download but we ask you to complete a registration form prior to downloading. Having completed the form, you will be directed to the download location, via a keyword enabled URL. You should also periodically check the updates.

Updates to the software that fix known bugs will be posted on the list, and described in the README.txt file in the SPM2_updates download area, at http://www.fil.ion.ucl.ac.uk/spm/download/spm2_updates.

You need the following to run SPM2:

Although SPM2 still uses the Analyze file format, and will therefore read image files from previous versions of SPM, there are differences in the algorithms, templates and models used in SPM2 over previous releases. Therefore, we recommend you use a single SPM version for any given project.

One thing to watch out for is the image orientation. The proper Analyze format uses a left-handed co-ordinate system, whereas Talairach uses a right-handed one. In SPM99, images were flipped at the spatial normalisation stage (from one co-ordinate system to the other). In SPM2, a different approach is used, so that either a left- or right-handed co-ordinate system is used throughout. The SPM2 program is told about the handedness that the images are stored with by the spm_flip_analyze_images.m function and the defaults.analyze.flip parameter that is specified in the spm_defaults.m file. These files are intended to be customised for each site. If you previously used SPM99 and your images were flipped during spatial normalisation, then set defaults.analyze.flip=1. If no flipping took place, then set defaults.analyze.flip=0.

Check that when using the Display facility (possibly after specifying some rigid-body rotations) that: